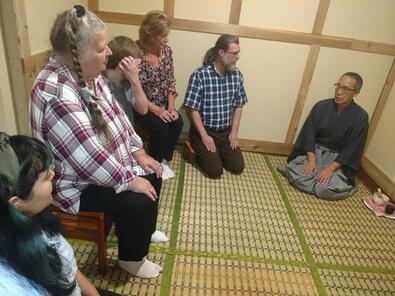 A tea ceremony is a ritualized form of making tea (茶 cha) practiced in East Asia by the Chinese, Koreans and Japanese. The tea ceremony, literally translated as "way of tea" in Japanese, is a cultural activity involving the ceremonial preparation and presentation of tea. The Japanese tea ceremony can also refer to the whole set of rituals, tools, gestures, etc. used in tea culture. The tea ceremony and rituals contain "an adoration of the beautiful among the sordid facts of everyday life", as well as refinement, an inner spiritual content, humility, restraint and simplicity "as all arts that partake the extraordinary, an artistic artificiality, abstractness, symbolism and formalism" to one degree or another.

The Kashimon Dojo has built a traditional Japanese 6.5 tatami  tea room with tokonoma and nijiri-guchi to host Tea Ceremony Classes and certification. Classes began on October 20th 2019 (4hrs) with Kaji Akihiko Sensei and will be held every 2 months. The Aim of this course of study is licensure of the various levels of Tea Ceremony. Beginners can join at anytime.

The study of chado will help students not only to broaden their understanding of Japanese culture, but also to enrich their daily lives by providing values that are very much needed in today's world. These include consideration and thoughtfulness for others; awareness of nature and the seasons; and the cultivation of discretion, gracefulness, and a spirit of hospitality.

The certification coursework will be composed of weekend intensives at various times per year in order to reach a tenable level. Please send us an email if you are interested in order to add you to our future list.​

About the Instructor:
​
We study under the guidance of Akihiko Kaji. Kaji Sensei (inset center) was born in 1951, in Shiga Prefecture, Japan. He graduated from Doshisha University located in Kyoto in 1974 with a Bachelor’s degree in Economics, and soon after married his wife, Minori, in 1976. He continued his education at Waseda Univeristy in 2009, graduating with a bachelor’s degree in Human Science. He spent the majority of his career working for Sony Corporation, residing in different countries around the globe such as Panama, Mexico, Germany, Korea and the US.

He was first introduced to tea by Miyo Itoh and was immediately entranced with its intricate art as well as the tranquility that it brings to him. Akihiko together with his wife studied tea for 5 years and in 2016 was granted the official license and qualification for teaching tea to other students. Now he and his wife teach and practice tea at their home several times a week. He has performed tea ceremony at a number of events, including schools, hotels, Japanese gardens and other cultural events.
He is the president of Urasenke Ichimura-kai in Miami.

He returns to Japan twice a year in order to continue learning the way to tea from his tea master in Kyoto.