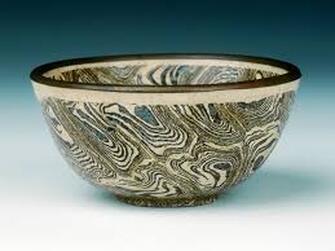 Nerikomi (練り込み , lit. "kneading") is an artistic technique for creating Japanese pottery in multiple colors of clay.  The technique is also called neriage (練上げ), although this term also refers to the throwing of multiple colored clays on a wheel.

Nerikomi is a contemporary Japanese term. Marbling ceramic techniques were used in Egypt and China and, through the Romans, to the West. Early ceramics in the Stoke-on-Trent use more than one color of clay for decorative effect. In England this was referred to as agateware. In Japan there are a few pieces from the Momoyama period, and Edo period, as well as Mingei and there was an explosion of it from about 1978–1995 due probably to Aida Yusuke's advertising and to Matsui Kousei who refers to his work as neriage.

Susan Borthwick was first introduced to clay in 1977 at Columbus College of Art and Design where she was a fine arts major. Her ceramic instructor, Ban Kajitani, was instrumental in not only teaching her basic ceramic skills but also the Japanese ceramic techniques of Nerikomi and Neriage. Susan graduated with a BFA and pursued her first career as an Art Therapist for seven years. During this time she learned to believe in the power of art to comfort, inspire and communicate. Susan returned to school to earn a MA in Art Education in the late 80s and then pursued a twenty three year teaching career, primarily teaching ceramics. She loved teaching her students about the infinite possibilities of clay including Neriage and Nerikomi. Susan is pleased that she has been able to honor her ceramic instructor, Ban Kajitani, by continuing to teach contemporary Japanese colored clay techniques to others.