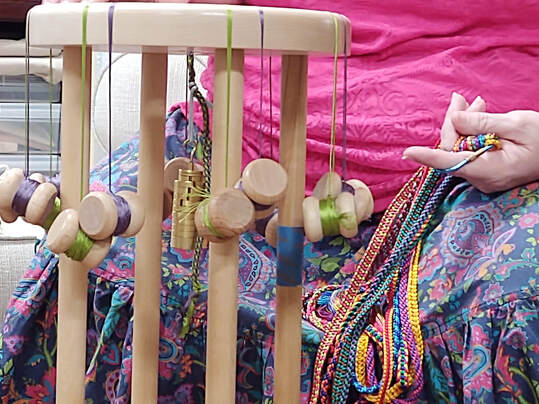 ​Classes are located at 37114 N thrill Hill Rd Eustis Florida 32736. Look for the dojo sign and follow the driveway to the top. Please park in the grassy area in front of the Block building. Materials fee is NOT included in course price.​ Children 16 and under must be accompanied by an adult.

$85.00
Register
​Kumihimo (組み紐) is a traditional Japanese art form of making cords. Kumihimo are made by interlacing groups of thread, commonly silk, with the use of traditional, specialized stands- which include the marudai (丸台) (lit., "round stand"), the kakudai (“square stand), the takadai (高台) (“high stand”, also known as a kōdai), the ayatakedai, and the karakumidai.

There are many different styles of kumihimo, which variously create cords ranging from very flat to almost entirely rounded; from square to pentagonal and spiral. The most prominent historical use of kumihimo was by samurai, as a functional and decorative way to lace their lamellar armor and their horses' armor (barding). Kumihimo cords are now used as ties on haori jackets and as obijime, used to hold some obi knots in place or to decorate the obi when wearing kimono. They are also used in Japanese Swordsmanship and in furoshiki, a traditional Japanese method of gift wrapping or carrying objects.

Kumihimo cords were first created by using fingerloop braiding to interlace the threads. Later, the five basic stands were developed to allow more complex cord to be woven in a shorter amount of time. The methods and patterns of interlacement were carefully guarded secrets for the craftspeople who created them. Depictions of kumihimo in traditional Japanese art were deliberately altered so as to prevent the true methods from being revealed. Today, artists around the globe have discovered this fascinating craft and are using historic structures to expand the possibilities for kumihimo.

In the late 1990s, Japanese Kumihimo Master Makiko Tada invented the kumihimo disc, a round disc of firm, dense foam with slots around the perimeter which help to provide tension as threads are moved around the center opening. These discs are considered to be a more affordable and portable alternative to a traditional marudai, making kumihimo accessible to a broader audience.

About the Instructor: Carol Franklin

Franklin sensei is an internationally-acclaimed fiber artist and teacher living in Orlando, Florida. Practicing the ancient Japanese fiber craft of kumihimo (literally "coming together of threads") for more than two decades, she has lectured, taught and exhibited work in Japan and throughout North America. Carol's work ranges from creating vivid images through joined braids to making rich jewelry combining silk, precious metals, glasswork and gems. Her teaching focuses on making this deeply Japanese form accessible to North American students.